Birmingham singer and musician Reuben James has teamed up with Tom Misch for his latest single, 'Tunnel Vision'.

Born in Sutton Coldfield and raised in Bromford, Reuben gained a name for himself performing across the city's many jazz venues, and playing with such artists as the Ladywood-based Notebenders and singer Ruby Turner.

He later came to the attention of Sam Smith's management after he was spotted performing at Ronnie Scott's, in London.

Teaming up with the mega-selling Sam, Reuben went on to co-write Him and the title track from 2017's 'The Thrill of it All', as well as tour the world with the singer/ songwriter. 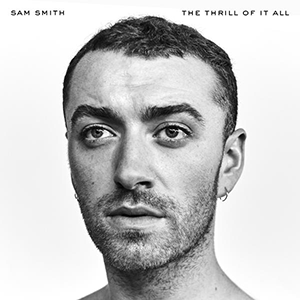 Above: Sam Smith's global hit album, The Thrill Of It - for which Reuben co-wrote tracks and played keyboards.

With his roots in jazz, soul and R'n'B, Reuben has since written for and performed with the likes of Tori Kelly, Little Mix, Disclosure, Col3trane, One Direction's Liam Payne, and even the legendary Joni Mitchell!

It's a journey that's taken him from Ladywood to Hollywood, including appearances on TV's Saturday Night Live!, and at such glitzy award shows as The Grammy's, MTV VMAs and the Academy Awards too.

It's not the first time Reuben has collaborated with Misch as the two previously worked together on Misch's Top 10 debut album, Geography.

Says Reuben: "Tunnel Vision is my latest offering featuring the hugely talented Daley and Frida Touray. Super chill, winter, cosy vibes - a love song about only having eyes for one person. Tom Misch blessed the song on guitar and Elliott Skinner on background vocals. I'm really proud of it."

"I was trying to recreate the perfect summer BBQ jam," explains Reuben of the previously released track, "... nice, easy-going, smooth summer vibes, linking up with two amazing talents for their input; Adam Flowers from Cali and the incredible trumpeter Keyon Harrold.


"I wrote and produced this in South-East London in my bedroom... imagining bumping it at BBQs [in the] summer!"

Help us improve  Click here if you liked this article  41

Doctor Who and The Comedians
41

Utilita Live From The Drive-In - CANCELLED
42

View all articles by David Vincent
Your business or event? Feature this article
Your Comment
Top Events

The Charlatans at O2 Academy, Birmingham
41

The Play What I Wrote
41

Christmas with The Rat Pack and Marilyn Monroe
41